Aug 16, 2016 | Be The Change, Business and Entrepreneurship, Interviews

If the video didn’t show up here’s the direct link: https://youtu.be/XkqL2KQ8Fn0 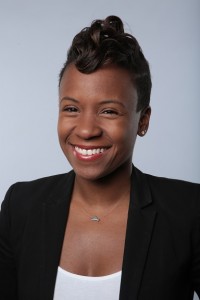 Stephanie Lampkin is the founder & CEO of Blendoor, merit-based matching, a mobile job matching app that uses a blind recruiting strategy to circumvent unconscious bias and thus facilitate diversity. With a 13 year career in tech spanning companies like Lockheed, Deloitte, Microsoft, and TripAdvisor, she is all too familiar with the difficulties faced when one doesn’t look like the prototypical engineer. Through technology and data, her mission is to reduce bias and challenge the assumption that homogeneous environments are a meritocracy. Stephanie holds a BS in Management Science & Engineering from Stanford University and an MBA from MIT Sloan.

Stephanie has been honored and featured in numerous publications including Forbes, NPR, NY Times, Tech Crunch, Huffington Post, Tech.Co and Black Enterprise. She has spoken publicly on a myriad of topics from the future of work to hacking unconscious bias at MIT Media Lab, Dreamforce, SXSW, and more. Most recently Stephanie graduated from Stanford StartX (a top 5 startup accelerator); the first Black woman founder/CEO accelerant in the program’s 5 year history. In response to the discovery that there are only 13 Black female startup founders in the world that have raised $1M or more in venture capital, Stephanie organized an elite cohort of Black female founders with high-growth ventures. Stephanie’s mission is to effectively demonstrate that investing in diversity yields positive returns socially, financially, and technologically.

Help break down unconscious bias one swype at a time… Become a Beta user at http://www.blendoor.com/

You can also connect with Stephanie via social media