Building Bridges: Reflections on Loving Someone with Mental Health Concerns 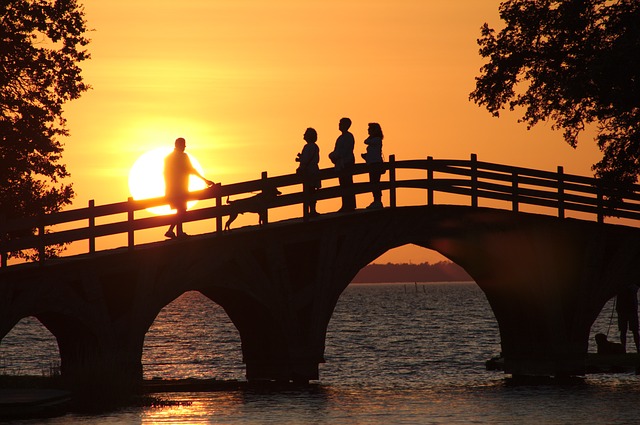 With the car still running, he tilted his head to the side and glanced over to make sure he could look me in the eyes. “Before this goes any further…” I hadn’t considered a him and a me in any other capacity before that conversation, but as I took in his words, I realized that at that point in our budding relationship (because that’s what it was) I’d be fine if he decided to stop “seeing” me if my response wasn’t what he wanted to hear. That would be a first for me. Even if I didn’t like a person, the “people pleaser” in me would not want them to leave…or at least I wouldn’t want them to leave with unsavory thoughts about me and my ‘no thanks’. I carefully thought about what he revealed. Not because it sounded appealing, but because it was the first time I was presented with such a notion. I measured it against the values I’d finally decided to honor and concluded we could not go beyond being just friends. We both had deal breakers we weren’t going to compromise. Our relationship continued the way it started (at least for me): no expectations, and even though I didn’t want it, still full of hope for genuine connection, acceptance, and honesty even if we didn’t agree or like what was being said. Much the same as any authentic friendship I already had. As the friendship blossomed, I began to learn things about love that I’ve never been present enough to grasp before. I began to understand more about loving someone with mental illness.

When another close friend of mine told me she was diagnosed with a bipolar disorder, I being the bookworm that I am, went into research mode. There are books out there about “how to love someone with mental health conditions”. As much as I fully believe that love is something to be studied, it is in practice that we fully grasp its meaning. As I considered my past, my discovery that I myself was that someone with mental health conditions began to shift how I viewed caring, compassion, and conscientiousness. I became more aware of my default “I” vs “them” I became more aware of the fact that socialization plays a huge role in the “othering” of people. Because of that I wanted to overcome social conditioning and do more “we” and “us” kind of thinking, even if it went against the grain. When I feel a bit more in touch with the “we” and “us” mindset, I think loving all boils down to the same elements whether one has a mental health condition or not. It’s simply that you love someone in a way that speaks to them, not in the way you’ve concocted in your head based off of how you want to be loved. Too often we mentally construct a fantasy version of someone molded from a shortsighted perception of the impression they left with us. Then we cling to the idea of what we should be to that person and how that person should be to us. I’ve been terribly guilty of doing that myself.

Here’s one of the hard lessons I’ve learned so far. The reason something so simple falls apart is because we don’t know how we want to be loved due to not loving ourselves first. How can you accept being loved if you can’t accept and love yourself? People love you based on what they, themselves, learned about love, and care. They can’t speak your love language and love you the way you want if you don’t show up for the love being given. I didn’t love myself. In fact, I didn’t even know, like, or trust myself. I was never going to be able to accept someone loving a person I couldn’t stand to be around. It only made me feel more inferior and inadequate because I saw more of what was wrong with me, and why I couldn’t measure up. This was the biggest reason my marriage failed many moons ago. And it would be the reason why any relationship I attempted would fail afterwards.

I didn’t think I was capable of love.

A shell of a person, I’ve been that girl before. I didn’t feel worthy of being loved, and I didn’t feel loving. I understood caring enough because I didn’t want “bad” things to happen to anyone, but I thought that was all I could do. I understood possessiveness, I have both been accepting of being a possession and wanting to possess. I understood abandonment and clinging due to fear of abandonment. I understood isolation and avoidance, and even abuse. It would often be accompanied with the words “I love you” but I knew even then that this was not love. My actions, however, didn’t want to cooperate with my knowledge. Even though I’d been hurt (was the “victim”) so many times before, it wasn’t until I became the “villain” that I was finally ready to acknowledge just how empty and dead I was on the inside. You see, it’s easy to play victim, you don’t have to change because everyone else is to blame for your life. You can keep on being miserable, complaining about your circumstances, and how they make you feel so low…you don’t have to worry about growth because there’s nothing wrong with you. They are to blame not you. You’re just “trying to help”.

Love isn’t manipulation so that the outcome is always in your favor even if at the expense of you.

I wondered if I could love “him” if given that opportunity again. I wondered if I could love them, the men I called brothers, the men I called friends. One day not too long after our car conversation, I glanced over at his smiling face. I saw him. This man who dealt with meds, and days of despair, and pain, and loss, and shame, and feelings of unworthiness. Who shut me out, perhaps thinking to protect himself, maybe even to protect me. When we 1st met I’d become love avoidant, careful not to make the same mistake of being so desperate to escape myself that I allowed someone undeserving access to my body without my heart and soul. I figured that if I only had mere friendships and casual acquaintances I could easily let them go and I wouldn’t hurt anymore. With him, with the love I’ve received from those I’ve called friends. I throw down the gauntlet. The glass casing surrounding my heart shatters into a thousand pieces. Yeah, the scars are there, but I’m still here, unbroken. Shedding shame, reclaiming my freedom.

Hope is an interesting thing. For as my heart swells with hope, I hope for true belonging, I hope I can accept as is, I hope for the experience of happiness even though it’s fleeting, I hope for the strength to endure the times we don’t agree and that even if angry we can still come back and get along, I hope for the best in you, I hope that we see the best in each other and think “how wonderful” “wow you’re pretty awesome even if you’re a dork” I hope that my worst doesn’t scare you and even if it does that your hope for the best still lingers and you decide to be forgiving and compassionate. I hope that we both have the courage to have boundaries and honor them. I hope that we can encourage each other without trying to control each other. I hope that we can be kind and understanding, that we can tell each other that we believe in the other and that we hope the other believes in themselves too. I hope that I will honor what I’ve learned about filling my own cup 1st by being responsible for my own emotional well-being so that I don’t unrealistically demand that of you. I hope I remember what I’ve learned about impermanence, and nonattachment, and still show up to love fully and from a place of wholeness with openness and trust.

I’ve come to realize that I had friends who gave those kind of gifts to me, and I wish I treasured them more back then. I can honor the friendships and relationships I once had now by how I treat myself and others. I’m thankful for reflective friends who remind me of that powerful lesson in life today.

I’ve come to realize that love has the capacity to grow in places you forget exists.

If love is truly energy and energy cannot be destroyed, then love has no limitations. It is only our limited ideals of what love looks like to us that confines it. I’ve wanted to run from love and loving, and even being loved because I thought that would mean a sense of control, security, and protection. I wanted to believe that love didn’t call out to someone like me, someone who took relationships for granted, someone who stayed in relationships long past their expiration date, someone who didn’t know how to even be a friend. To be presented with people, beautiful souls who fear the things I’ve feared, and hurt the way I’ve hurt, who hope despite it all the way I still hoped despite it all is no coincidence. As they learn from me, I learn from them. We all learn from one another.